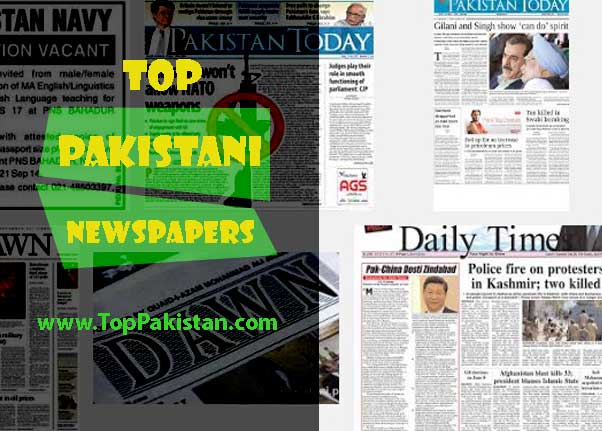 There are many English newspapers in Pakistan, in this article we will study about some of top rank Pakistani English newspapers. Although the world of technology has been captured from all around, reading newspapers is still a part of the daily routine of almost all literate Pakistanis. It is a great source to get aware that what is happening in the world? It is the most common way to get connected with the latest update not only locally but all over the world. Although Newspaper has been reading by every literate since centuries but it is almost replaced by electronic media, social media like websites etc. But still many people love to read newspaper and give more importance to newspaper than any other source.

People often start the day, while reading the latest news of previous day because newspapers give a detailed scenario of an event or update.

There are many Newspaper publishing in the Pakistan but the top Five English newspapers are listed below;

Due to the popularity in public and providing truth with responsibility we have ranked these newspapers in following manner.

Nawa Media Corporation in 2010 found this English Newspaper. Its editor and publisher was a senior journalist ArifNizami. Pakistan Today is published from three main cities of Pakistan- Lahore, Karachi and Islamabad. The operations of this newspaper are headquartered in Lahore. It is the first Pakistani Newspaper that is published in Berliner Format.

The Daily Times is an English Pakistani newspaper most recommended by Pakistani readers. It was started in 2002 by Rashid Rahman. This newspaper is published simultaneously from three major cities of Pakistan namely Karachi, Lahore and Islamabad. The Daily Times is famous for its real and recent news and controversial issues. This magazine offers the latest news from around the world.

Another English newspaper known as “The Nation” is the most famous and renowned newspaper. It was founded in 1986 and recognized as the most prestigious and admired newspaper in Pakistan. A well-established group of Pakistan Nawa-i-Waqt group founded this newspaper. The Nation is famous to bring real stories as well as controversial issues.

A well reputed and the leading English newspaper in Pakistan is Dawn Newspaper. Dawn is the oldest and most widely read newspaper in Pakistan. It was launched in 1941 by Quaid e Azam Muhammad Ali Jinnah , the founder of Pakistan. Dawn Carries important and significant updated news from around the globe. Readers of Dawn love to read a real stories and issues from this newspaper.

The largest Pakistani English newspaper was founded by Jhang Group of Newspaper. It was founded in 1991 by Mir Shakil ur Rehma. The News is also published from the main big cities of Pakistan named Karachi, Lahore and Islamabad. The News provides updates to the readers along with proofs and authentications. The News also publishes entertainment paper on every Sunday along all entertainment news from all over the world.