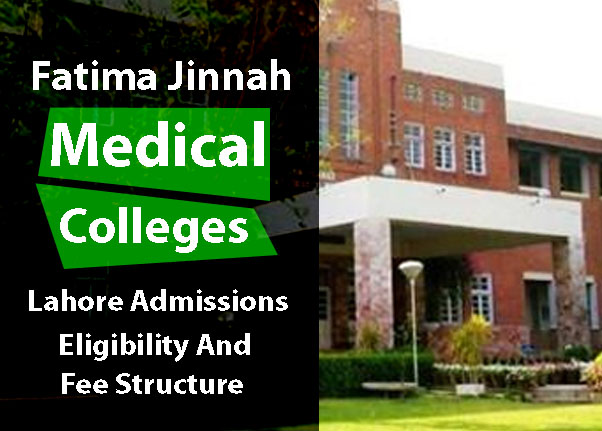 The idea was nurtured by Sir Ganga Ram in 1921 to open a hospital for handling basic demands of the locals of the Walled City of Lahore in the health sector. The patients, as well as the popularity of the serious work of Ganga Ram, grew in the subsequent years; it had to be shifted to help and take care of more patients. The present-day location of the hospital was moved in 1943, after the independence it was abandoned for quite some time. Before partition in 1946, the Balak Ram Medical College was already established in the legacy of Ganga Ram. After the partition, Professor Shujjat Ali worked hard to reopen it by giving it a name of Mother of Nation, Mohtarma Fatima Jinnah. Fatima Jinnah Medical College passed out its first batch of medical students in 1948, the official ceremony of its commencement was held in March 1949 by the Prime Minister Khwaja Nazimuddin.

The location of Fatima Jinnah Medical College is right next to Sir Ganga Ram Hospital at Queen’s Road, Lahore, Pakistan. The 26 hectares of land comprises everything a medical university must possess for advanced medical education. The college was given a status of University by Ministry of Health and Education in 2005. Since then, it has a functioning vice chancellor and board of governors.Fatima Jinnah Medical University is on its way to becoming the finest women the Medical University of Pakistan. The university has a dedicated portion of extracurricular activities; the indoor gaming is quite popular among female students.

There is a conducive environment for study and sports due to the efforts of vice chancellor maintaining the strict discipline for the students and staff. A free WiFi facility is available for the students throughout the premises of campus. The air-conditioned lecture halls and theater rooms are made to accommodate 100+ students. The laboratories are well equipped for students with highly qualified staff and faculty available 24/7 to help students learn and explore.

The hostel facility is available for all the students of MBBS and BDS programs, around 1500 students are enrolled at Fatima Jinnah Medical College out of which there is room for 1000 students in hostels. There is every possible service available for the hostel students; it includes free internet and WiFi logins, TV lounge, indoor sports rooms, modern swimming pools, gymnasiums, water, and laundry facilities.

The admission dates for Fatima Jinnah Medical College Lahore are announced through all the leading English and Urdu newspapers of Pakistan. The FJMU follows a particular quota system, a total of 250 seats are allocated for the MBBS and BDS students every year of which 50 percent seats of open merit are reserved for Punjab. The remaining 50% seats are for federal areas; it includes reserved seats for FATA, AJK, KPK, Sindh, and Balochistan. For international female candidates, preferably from Muslim countries of the friendly nations of China, UK, USA, and Srilanka. There is an individual quota of 23 seats under Pakistan Technical Assistance Program.

Admissions are announced on 4th August every year; the students are required to submit a fee challan of Rs. 2000 to Fatima Jinnah Medical College Lahore. The fee challans are available online as well as from the admissions cell of FJMU. The entrance tests are held in August, or the first week of September, JCAT tests are held with computerized marking systems. Privileges are provided for the disabled students with reserved seats as well as eligibility to compete in open merit examinations.

For hafiza e Quran students, there are dedicated marks awarded apart from the entrance tests that are given after an interview of the student. The interviews for Hafiza e Quran students are held from 15-20 September every year. For MBBS candidates, the merit lists are displayed on 30th October. The second and third merit lists are dispatched on the notice board as well as on the official website of the university after a week’s break.

Classes for MBBS courses start from November, the merit lists for BDS candidates are shown in mid-December and the classes beginon December 24.

The eligibility criteria for MBBS and BDS candidates is same as described by the Pakistan Medical and Dental Council. Minimum, 60% marks, are compulsory for the candidates to appear in the entrance test. For international students, 550 scores are a must with subjects including English, Chemistry, Biology, and Physics. The aggregate calculation is described as follows:

In the clinical sciences unit, the department of plastic surgery, anesthesia, ophthalmology, ENT, urology sciences, and kidney transplant departments are the important ones.

As part of the policy, fulfilling all the criteria of Ministry of Health and Education, Fatima Jinnah Medical College Lahoreis affiliated with PMDC and UHS. The teaching hospital for house job training of FJMC students is adjacent Ganga Ram Hospital. The 700-bed hospital packed with patients provides the newly graduated students with a broader work experience in their internships. Moreover, the hospital is fully equipped with modern and sophisticated labs and machines and a 24-hour power backup system. The degrees awarded to the students of Fatima Jinnah Medical College Lahore are granted by the University of Punjab, Lahore. The women college is affiliated with College of Physicians and Surgeons Pakistan. It has also started MS and MPhil programs under the recognition of PMDC.

The admission fee for Fatima Jinnah Medical College Lahore is Rs. 50,000 excluding funds and additional exam fee. The tuition fee as permitted by PMDC is Rs. 600,000 per year excluding taxes. With the inclusion of taxes, admission fee, tuition fee, and miscellaneous charges, the total fee may exceed Rs. 900,000 per year. the foreign students have to pay $12,000 in thefirst year of 5-year MBBS and BDS program.