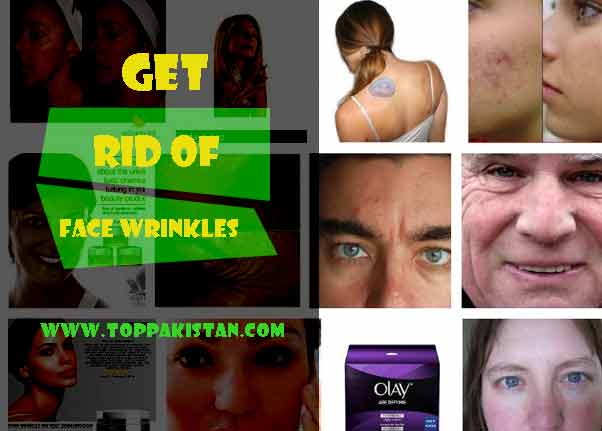 Most common asked questions is get rid of face wrinkles, We all have grown up listening to stories told at bed time by our grannies or mothers. Stories which had some or the other morals in them. The fact which made these stories so interesting was the various colorful characters embedded in them. If you try to recollect some of these stories now you would notice a very peculiar thing. What exactly do you remember of the appearances of the ladies? The central female character or the heroine was always portrayed as the one with beauty, charm, elegance, fairness while the villainous witch was always shown as being ugly, crooked, evil and one with a wrinkled face. There is, therefore, no doubt why all females are so apprehensive about their facial skin / wrinkles. They say “wrinkles are a sign of aging”. To be politically correct, this statement is true to a greater extent.

Get rid of Face Wrinkles

Our skin is held in place by an accurate arrangement of underlying fibrous tissue, connective tissue, muscles and blood vessels. When in health the skin lies in perfectly stretched condition. There are hardly any wrinkles except seen on the scalp during times of stress. But as the age advances muscles tend to become weak and lax, fibrous and connective tissue starts losing its consistency and ridge or furrow start appearing in the skin. These ridges are what we call “WRINKLES”. The saddest part in this case is that the wrinkles become very obvious on the face. You can hide wrinkles anywhere on the body except the face!

Earlier generation of our ancestors used to wrinkle in their forties and fifties. But the present generation of the twenty first century believes in a fast paced life. They want everything to run at a jet speed! Hence, unknowingly they are exposing their body to unbearable stress. Unable to cope with this, the body is using up all its resources due to which people have started wrinkling in the early thirties! But man is one of the most obstinate creatures made by the Almighty. It is said “when the drunkard read about the evils of drinking he gave up reading”. In the same way, instead of learning to lead a healthy life, man started finding ways to battle his wrinkles.

This battle ended with the discovery of a phenomenon called “Facelift”. A surgical procedure where excess facial skin causing wrinkles is manipulated along with the underlying structures and redressing of the skin is carried out to give a more attractive appearance. A procedure, similar to plastic surgery and requires the same skill. Let me try to explain the procedure in a simple way! Have you ever tried to cover some book with a book cover? No cover is such that it exactly fits the book. In the beginning, the book is placed within the cover. A small cut is given along the borders of the cover along the margins of the book. Then, the borders are folded across the margins of the book in such a way from all sides that the cover appears neat and straight and all excess paper material is either hidden inside or neatly cut off. The finishing touches are given by sticking the parts of cover material inside the book by means of glue. You will soon realize that the book is looking more beautiful than before! If this can happen with a simple book then imagine what must be happening to the face?

But nowadays, going for facelift surgeries has become a fashion statement. Almost all leading stars of the tinsel town are having their face job done because the film industry is such that it runs on the glitter of the face. Though such surgeries are very appealing to the masses, they are very expensive at the same time. The absence of wrinkles from the face leaves a huge hole in the pocket undoubtedly. Another fact to be taken care of is that such surgeries have their own side effects. The face being very sensitive part of the human body, any visible scarring left behind could be a source of mental trauma throughout the life. Therefore, one should take several opinions from different doctors before actually going in for the facelift surgery.