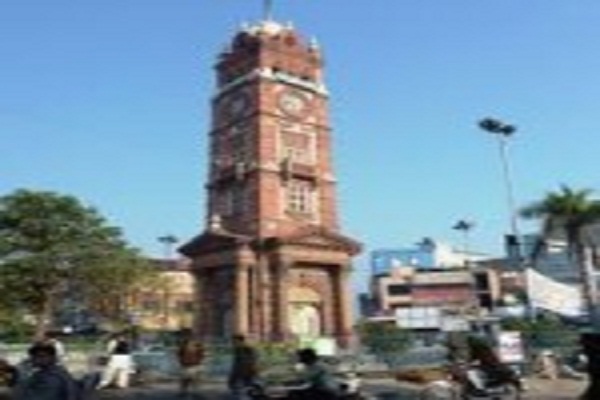 The Faisalabad Clock Tower is a clock tower in Faisalabad,Faisalabad is also known as the Manchester of Pakistan and is one of the antique monumentsstill present in its original state from the period of the British reign. It was built by the British, when they ruled much of the sub continent during the nineteenth century. When ever any one talk about the visit to Faisalabad the image of Hour house immediately comes to the mind. It is present in the centre of 8 bazaars which are Aminpur bazaar, Katchery bazaar, Karkhana bazaar, Jhang bazaar, Bhawana bazaar, Rail bazaar, Chiniot bazaar and Mintgomery bazaar named after Montgomery. These bazaars are linked with this hour house. If we look these formations of bazaars through satellite image we will see the flag of England as British has just designed their flag in Faisalabad. The foundation of this superb Clock Tower was laid on 14 November 1903 by the British lieutenant governor of Punjab Sir Charles Riwaz and the biggest local landlord belonging to the Mian Family of Abdullahpur. The fund was collected at that time to get the land for its establishment. The fund thus raised was handed over to the Municipal Committee which undertook to complete the project.

The locals refer to it as Ghanta Ghar in Urdu which translates into hour house in English language. It is located in the older part of the city. The clock is placed at the center of the eight markets that from a bird’s eye view look like the Union Jack flag of the United Kingdom. During festivals of Eid and Independence Day the mayor of Faisalabad delivers a speech at this place and hangs the flag at full top. People mostly know about that clock tower because it is linked with 8 bazaars and people use to visit there for shopping and that’s why its more famous because of its location as everyone has seen it because of its presence in commercial area.