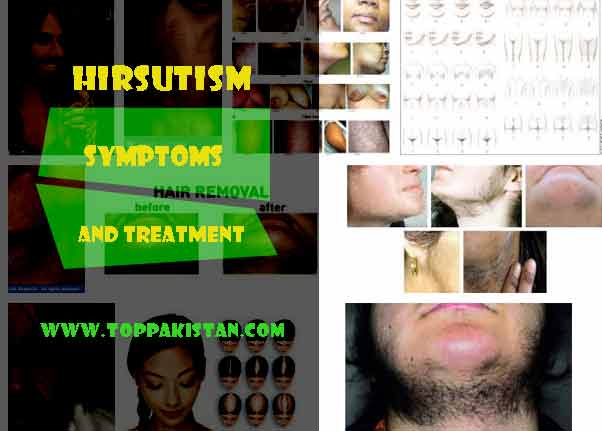 Everyone has body hair and he/she should know about hirsutism symptoms. The quantity & quality totally depends on our genetic makeup. But what happens if there is an outburst of hair growth all over, especially, among women, such a condition is called hirsutism. The hair follicles (this is where a new hair is produced) are dependant on hereditary factors. The human body is totally covered with hair, only omission being the lips, palms of the hand & the soles of our feet. Hirsutism is a state in which even women acquire excess facial & body hair. Therefore, such a condition is also considered & referred as an abnormal one. Though hirsutism is not a disease, it can cause a lot of misery, anguish & humiliation. The reason being, women having excessive hair are simply not considered feminine in the modern society. As a condition though, hirsutism cannot cause any physical complication.

The growth of hair follows a male pattern i.e. hair growth over the upper lip or chin. Hair growth also seems to be more than usual on the arms & legs. In some situations, hair may also sprout from the chest, lower abdomen & thighs. Apart from excessive hair care, other symptoms like irregular periods, deepening of voice and partial frontal balding which suggests an increase in the male hormones clearly shows a severe condition of hirsutism. Other symptoms include acne & a decreased breast size. Symptoms may include hair emerging from the shoulders on the lower back & upper abdomen. In a number of hirsutism cases, its might be due to a basic medical disorder. Doctors can confirm this with some mandatory blood tests & checking the patient’s medical history.

In men it is due to testosterone. These levels of testosterone are produced in a small quantity in women. Women who suffer from hirsutism have a tendency to produce high levels of these hormones also called as androgens from their ovaries & adrenal glands. In rare cases women do inherit this disorder because their hair are highly sensitive to even less amount of male hormone, so they reproduce darker & thicker hair. Doctors tend to check the family history first. Rarely hormone tests might also be required. Other causes can be credited to HRT (it helps to increase the levels of the female hormone ‘oestrogen’), steroids used for muscle building, oral contraceptives, danazol, & anorexia. Still, other causes include obesity, severe insulin resistance, tumors on the adrenal glands or ovaries, Cushing Syndrome and Polycystic Ovarian Syndrome (PCOS)

There are many initial cosmetic procedures to hirsutism home remedies e.g. bleaching, shaving, waxing, electrolysis (permanent hair removal) & laser removal. The most effective among these is the removal of hair by laser, as the laser is directed to kill the hair follicles very specifically, hence the rays doesn’t damage the skin around the hair follicles. This laser treatment is speedy, painless, efficient and mostly the hairs are permanently removed. Weight loss program is also suggested because this decreases the insulin resistance and the levels of serum androgens. There are topical creams available in the market which can slower the rates of the fatal hair & also lighten the dark hair. If the person suffering from Hirsutism is not satisfied with the removal or is facing problems controlling the hair growth, should consult with a General Practitioner (Endocrinologist).

Certain medications are also prescribed by the healthcare advisor which can help suppressing the hair growth so that they grow thinner & hence less prominent also there are many hirsutism treatment in homeopathy. However, Hirsutism reverts back when the medications are ceased. Some medications are also recommended which can subdue the formation & secretion of the androgens in the body. The removal of the tumor & the ovary can also be suggested in some cases.

Recent discoveries also point out that acupuncture helps in dipping the density & the length of the hair. Surprisingly, in addition to that, it assists to drastically lessen the levels of the male sex hormone. Herbalists have also derived that herbs like fenugreek, Goats Rue, Black Cohosh & Chaste tree can be used to reduce the symptoms of hirsutism. Researchers from a Mediterranean country have proclaimed that drinking the spearmint tea twice a day, lessens the level of the male sex hormones.