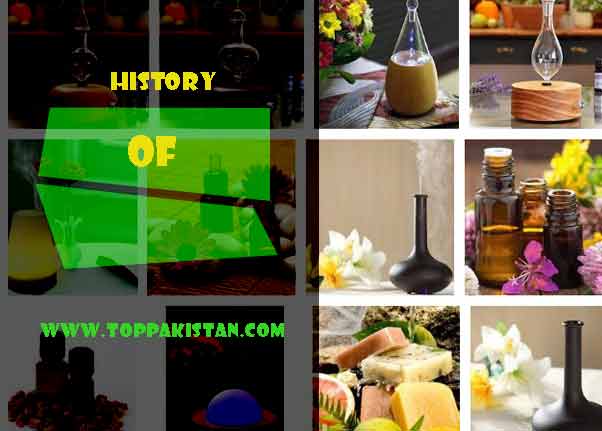 History of aromatherapy tells us it is as a form of healing is believed to be at least 6,000 years old. The Greeks, Romans, Indians and ancient Egyptians all have used aromatherapy oils. However, the consensus of opinion is that aromatherapy originated in Egypt. Many ancient civilizations contributed to the development and
The Egyptian Link

Use of oils extracted from various plants for curing of ailments is well documented in the ancient Egyptian manuscripts. An ancient Egyptian manuscript, dating back to around 1555 BC, describes methods for curing various ailments. The suggested cures bear a striking resemblance to today\’s aromatherapy. Ancient Egyptian physician Imhotep, suggested the use of fragrant oils for bathing, massage and for embalming the dead. Incense appears to be one of the earliest ways of using these aromatic extracts. There is mention of Frankincense being burnt at sunrise as an offering to the sun god.

Hippocrates, who lived between 460 BC and 377 BC, was the first physician to dismiss the Egyptian belief that illness was caused by supernatural forces. He believed that there existed a natural explanation for all illnesses. This could be done by a careful observation of the patient and the symptoms of the illness. He can be regarded as the father of modern medicine. He recommended aromatherapy baths and scented massages for various purposes. He also used the benefits of aromatherapy to rid Athens of the plague.

His treatments involved mild physio-therapies, baths, massage and also the internal use of various herbs. Hippocrates studied and documented the use of over 200 different herbs. As per him, surgery was the last resort for curing an ailment. He was the first to introduce the concept of holistic healing.

Greeks also contributed to the history of aromatherapy. They used the extracts from aromatic plants for various medicinal purposes. Pedacius Dioscorides, a Greek physician wrote a book on herbal medicines called “De Materia Medica”. This book served as a reference point foAr aromatherapy for about 1200 years in the Western world. Some of the remedies suggested in the book are used till date.

The Roman knowledge for aromatherapy relied on the works of the Greeks, but they further developed the practice of aromatherapy and improved the composition of aromatic extracts. They also started the trend of importing new aromatic ingredients from Arabia and East India.
The rapidly expanding trade routes, aided the spread of aromatherapy to Arabia and the Far East.

An Arab physician, Avicenna, developed the process close to modern methods of distillation sometime between the years 980 AD and 1037 AD. This helped them to produce lighter perfumes that were not heavy oil based. This can be said to be an important development in the history of aromatherapy.

Ancient Chinese civilizations were also using the extracts from aromatic plants for medicinal purposes at the same time as the Egyptians. The oldest surviving medical book of the Chinese civilization dated around 2,700 BC and written by Shen Nung has details for the use of about three hundred different aromatic herbs for various medicinal purposes.

Ayurveda, an ancient form of Indian medicine, has records of use of aromatherapy for over 3000 years

On their invasion of South America, Conquistadores were pleasantly surprised when they discovered that the Aztecs used many aromatic herbs and oils for medicinal purposes.

The Modern Form of Aromatherapy

Use of aromatherapy and its benefits came to Europe in the nineteenth century. In the twentieth century, a French chemist, named René Maurice Gattefosse, accidentally discovered the effects of lavender oil in curing and easing the pain from burns. He was very impressed with the fact that the oil not only hastened the process of healing but also ensured that no burn scars were left on his skin. He coined the word ‘Aromatherapy’ and set up a business producing oils for use in cosmetics. He also started researching the effects of other essential oils for healing, therapeutic benefits.

During the Second World War, Dr Jean Valnet a French army surgeon, popularized the use of essential oils as antiseptics. Madame Maury can be credited with elevating aromatherapy to the level of being a holistic method of healing and with modern usage of oils for massage. Another Frenchman, Albert Couvreur, published a book on the applications of essential oils in medicine.

From theses French studies, Aromatherapy evolved to the form in which as we know it today.