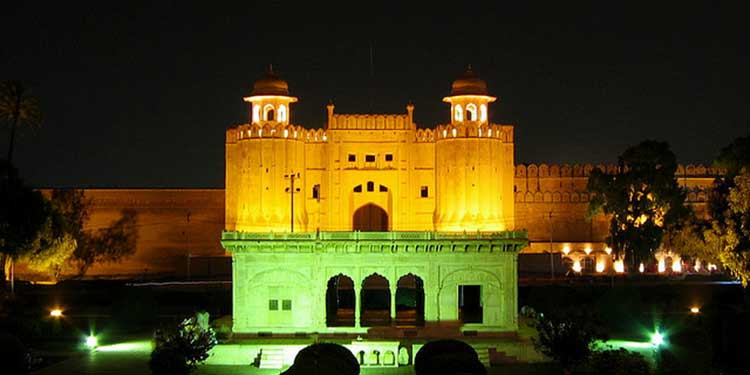 Lahore is the provincial capital of the Punjab province and considered as the heart of Pakistan. The city has a rich cultural heritage. It is home to a number of great constructions of Mughal era.  Shahi Qila Lahore (Royal Fort of Lahore) is one of them. There is a part of Lahore, called “Androon-e-Shaher”, which is an old walled part of Lahore city. This fort with its full grandeur and magnificence is located at the north-west of this section of the city.

origin of the construction of the fort is obscure; however, the construction of the structure’s base is attributed to King Akbar, a Mughal Emperor who reigned from 1556-1605 A.D. Afterwards, with the passage of time, each following emperor kept on adding to its architecture. Subsequently it went into the hands of Sikhs and later on to the British rulers. At present time, it is under the jurisdiction of Punjab government of Pakistan. This monument is also included in UNESCO World Heritage Site.

Shahi Qila Lahore is spread over an area of 20 hectares. It consists of two gates called Alamgiri Gate and Maseeti Gate. Alamgiri gate was built by Mughal Emperor Aurangzeb Alamgir. This gate faces Badshahi Mosque and currently used as the only entry gate to the citadel. The fort consists of a number of architectural sites added by various Mughal Emperors. The notable structural segregations are highlighted below. Moti Masjid was constructed by Mughal Emperor Shah Jahan. White marble has been used in its construction. It has 3 domes and five façade arches. Later on, in the Sikh era, this mosque was turned into a temple called as Moti Mandir. Hall of Commons or Deewan-e-Aam was also built by Emperor Shah Jahan. With 40 pillars, it was constructed in 1628 A.D. It was used to hold the court for the problems of common people. It was resurrected in the British era once destroyed in a Sikh invasion of Sher Singh. Shah Jahan had spent Rs. 900000 (a big sum at that time) to construct Naulakha Pavilion. It is notable due to its roof which is remarkably curved with central arch. This displays the unmatched skill of the Mughal architectural design. Khwabgah was the place where Shah Jahan used to sleep. It was his bedroom. In the entire fort, it was the first building constructed by Shah jahan. He had given the charge to Wazir Khan for its construction. In the interior of the chamber, there are mural paintings. The marble for decoration of the chamber has faded with time.

The construction of the Harem (quadrangle) was initiated by Emperor Akbar and later completed by Emperor Jahangir and henceforth known as Jahangir’s Quadrangle. It was built for Royal women and children. The building consists of underground sections also. There is also a garden in the quadrangle. It is called Chahar Bagh. The garden has a few fountains and is surrounded by walk paths. Sheesh Mahal was also constructed during the reign of Shah Jahan under the charge of Mirza Ghayas Baig. Sheesh Mahal was for the ladies of the fort. It has a large hall. Behind this hall, there are a number of other halls. This palace is one of the most grand and glorified palace of the Mughal era. Various marble stones have been used in its construction like Sang-e-Badal, Abri and Musa. Besides, various precious stones have been embellished with marble. The palace also has a perforated screen of marble. Also there is a water chamber in the center of the palace with four beautiful fountains. Constructed by Shah Jahan, Khilwat Khana was a mansion for the royal women of the fort. Its roof is curved in design. Its door frames and columns are ornate with marble.

Maktab Khana was a gate used by the clerks for their entry into the fort. It was built by Jahangir. The construction was carried out by Mamur Khan.

Lahore fort is the epitome of Mughal era’s construction accomplishments which instigates to dig deeper into the history of Shahi Qila Lahore. Besides, Badshahi mosque is right in front of the gate of the fort. The close locality of the two historic monuments is a great attraction for visitors.