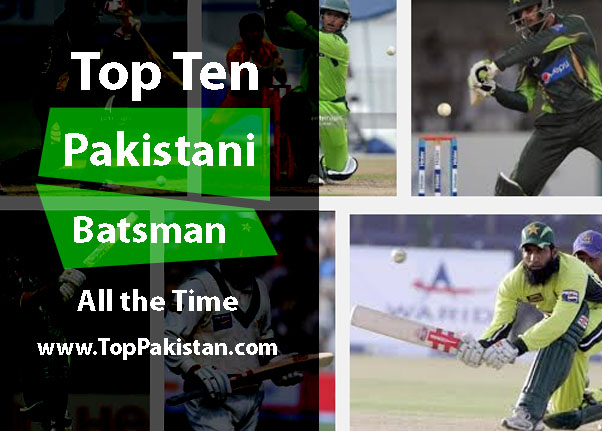 The most popular Pakistani Batsman’s are:-

Javed Miandad was the one of the most popular batsman ever generated by Pakistan. He had a different type of Strokes and a very good command to play the pull shots. He has performed many times in the critical situations in Pakistan and that’s why he was considered as the main power and backbone ofthe Pakistan Cricket team. He has the ability to play a good game at any ground without any pressure.

Hanif Muhammad was the one of the legendary player of Pakistan. His sound technique and passion is really perishable. He was known as the run scoring machine in Pakistan. He has played the record innings against West Indies in 1957. In the recent past, he has been dying after a long illness. We tribute him for his services.

Zaheer Abbas was known in the history due to his good batting technique. He was the monarch of an extra cover drive. He has an ability to rotate the strike and when he comes on the grease, then every bowler try to out him as soon as possible. He has played the innings of 274 scores at the Oval Cricket Ground against England.

The Legend Inzamam Ul Haq always considered the match winning player for Pakistan. He has a ability to performed in every do or dies situations. His emotion and passion and his outstanding sound technique were really awful to see. In 1992 World cup semi final he has played the 60 runs innings just on 37 balls and as a result Pakistan win the match easily. He has a very great and good batting technique. It was always desire of every bowler to get his wicket.

He was the classical left handed and an outstanding batsman. He has been the most successful opening player for Pakistan ever. He has ability to stay on thecrease for a long time. He has served in Pakistan asan opening pair with Aamir Sohail over the number of years. He has played the fantastic innings of 194scores against India that has remained record for a number of years, but now has been broken by Rohit Sharma.

The Majid Khan was a one of the successful and legendary Player of the Hook shoot. He was a master blaster of the bad wickets. He has played the best innings of 167 runs against West Indies in 1977 in Georgetown.

Mohammad Yousuf was born on 27 August 1974. He played his first Test against South Africa in Durban and did his One Day International debut against Zimbabwe at Harare. He has scored more than 9,000 One Day International runs at an average higher than 40 (2nd fastest batting average among Pakistani batsmen after Zaheer Abbas and over 7,000 Test runs at an average above 50 (2nd highest batting average amongst all Pakistani batsmen) with 24 Test centuries.

He is a great player to watch when he is in form. The most awful thing about Younis Khan is that he is in between one of those batsmen who have never given any Relaxation to the bowler and rotates the scoreboard with his useful batting technique.

His full name is Misbah-UL-Haq Khan Niazi. He is a Middle-order batsman and his batting style is very well and he is also captain of the Pakistan test cricket team. In his captaincy, Pakistan has got the first ranking in the test.

He is a Pakistani professional cricketer and former captain of the Pakistan cricket team. He made his debut against Sri Lanka and he has also made third fastest century in history. He is a very popular due to his batting aggressive style and he is known as by Boom Boom in history.